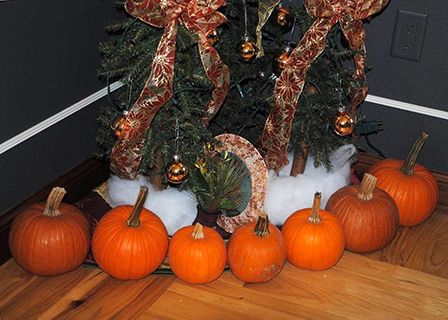 Yes, those are pie pumpkins around Christmas decorations. Embarrassing as it may be, I thought that I would have used them before now. I should have made pumpkin pie for Thanksgiving and Christmas, but we traveled for both holidays and I didn’t have to do any baking. The pumpkins just sat and waited… Now that the holidays are over and we have settled back into our routine, I have made the pumpkins a priority! Frankly, I am surprised they did not rot! 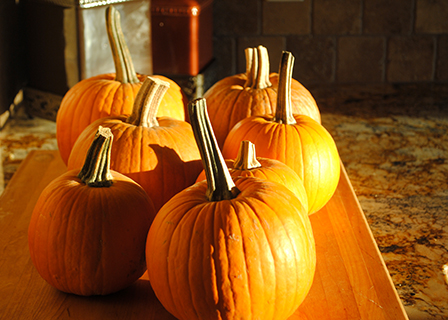 Making pumpkin puree is simple and straightforward. We are accustomed to the convenience of the grocery store, but I don’t think we realize how easy food preservation can be. I’m not saying that I make everything from scratch but when I do, I feel a sense of satisfaction and pride.

Better late than never; I first washed all seven pumpkins in the sink (they had a dusting of Christmas glitter on them). These left over pumpkins happen to be pie pumpkins, but you can make puree with all types of pumpkins, although different varieties have a different texture and water content. 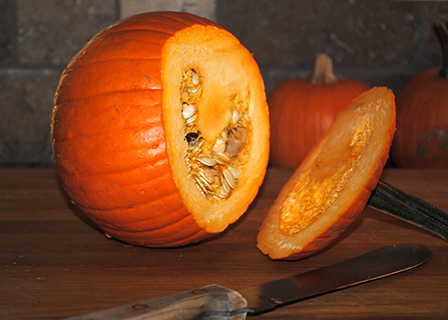 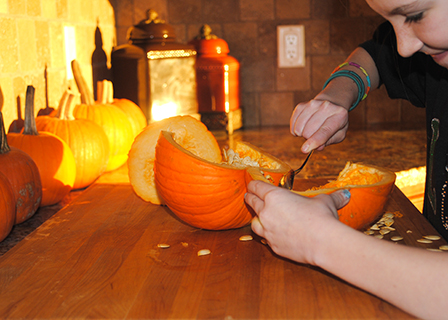 Next, I cut the tops off and removed the “guts.” I saved the seeds to roast and the rest of the pulp went into the compost.

I cut each pumpkin into four to eight pieces. 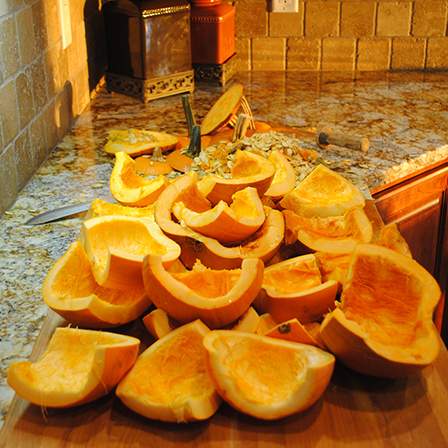 I put the pieces on baking pans, pulp up or down. Some people have a strong opinion on which way is better; I don’t think it makes much of a difference. You can form your own opinion when you make your own puree. 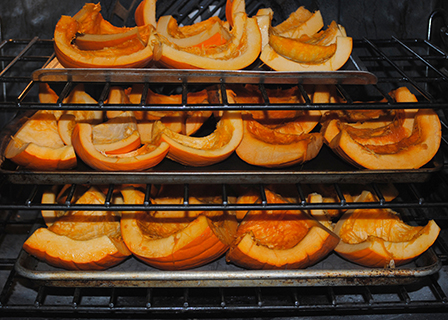 Bake them in the oven at 350 degrees for forty-five minutes or until the pulp is soft.

Remove from the oven and peel the rind from the pulp. I started with a knife, but then realized it wasn’t necessary and could use my fingers to peel the rind and pulp apart. It would have been easy for the kids to help with this part of the process; however, at that point no one was interested in helping dear ole’ mom. 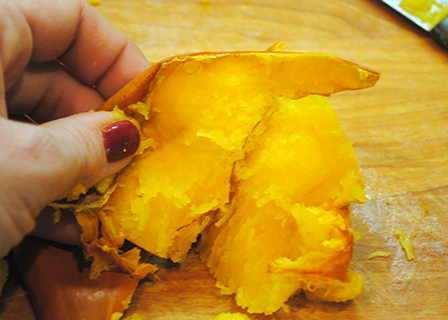 After cooking, the rind is still fibrous/stringy and needs to be further processed to transform into a puree. To puree the pulp, use a blender, food processor, or mixer. We used a hand blender and it worked perfect. 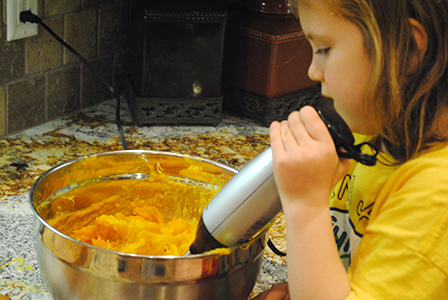 Scoop out one to two cups per freezer bag, label, and put in the freezer! IT IS THAT EASY. Minus the forty-five minutes of baking, it took about two hours to finally put these pumpkins in their proper place, the freezer. 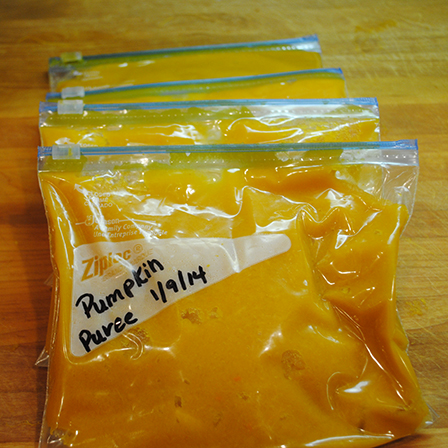 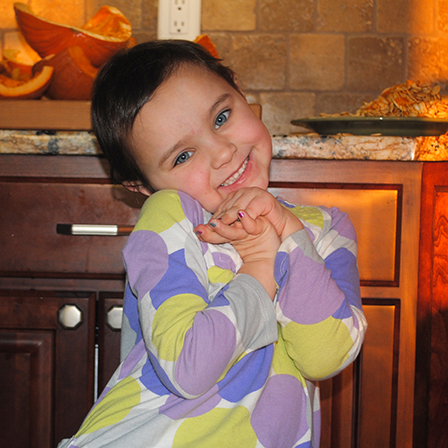 This little darling said, “Mom, pleeeaaassseee make me a pumpkin pie.” How could I say no to that sweet face? Fresh pumpkin pie in January, why YES, I can do that! Despite the frozen state of the soil, we can enjoy fresh pumpkin pie, bread, cookies, muffins, and dip.

My seven pumpkins may have been the only pumpkins left here in America, but during prime pumpkin season, pumpkin farmers harvest early 12.4 million cwt (hundredweight) of pumpkins. According to the USDA, the top pumpkin producing state is Illinois, followed by California, Ohio, Pennsylvania, New York and Michigan. I may not grow enough pumpkins to be considered a pumpkin farmer, but come summer we will cultivate the soil, add nutrients and grow our own pumpkins so that come January, there will be more fresh pumpkin pies.

Top 10 Reasons to take your family to the farmers market
Nutrients in the Garden 4: What to Grow
Garden Calendar: June Tips