“Soil is a precious resource that I hope students learn to protect so future generations may also reap the benefits,” said Leslie Meredith when asked why teaching soil science is important to her.  She is passionate about teaching environmental and agricultural issues at a global level to her 7th grade students at West Hardin Middle School in Cecilia, KY.  Ms. Meredith took a moment to share with us why the Humanity Against Hunger online game is her favorite Nutrients for Life Foundation resource. 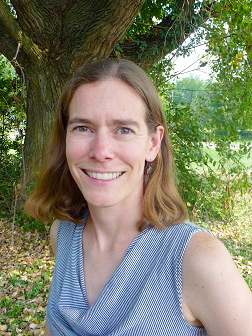 How I found the Foundation:  I was drawn to the Nutrients for Life booth at the regional NSTA conference in Louisville, Kentucky with the visually appealing and brightly colored posters focusing on Agriculture.  After a short discussion with the presenters, I realized this was a wonderful opportunity to integrate Agriculture into my classes as an extension of our curriculum with easy-to-use lessons.

How I used it:  I used the lesson, Humanity Against Hunger, during a chemistry unit in 7th grade science.  Students examined elements and the symptoms of nutrient deficiency in corn within this lesson.  This activity also integrated Social Studies topics of economics, geography, environment and culture that led to low corn yields in three villages in Africa.  The students loved the real world application the lesson provided. The cumulating activity was a female alumnus presenting about her four-month journey in Liberia teaching best management practices and promoting good agriculture stewardship.  This coincided with the 40th anniversary of National Agriculture Week, and was a wonderful connection with the theme Generations Nourishing Generations.  The community speaker helped tie this lesson together by incorporating the same suggestions students made in their online project with what she did in Liberia.  This lesson revisited our soil and plant units while combining chemistry and several strands of Social Studies.

Student reactions:  Students couldn’t believe that Liberians spent most of their day bent over at the waist as they worked and that they had to hike to get water several different times during the day.  The cultural differences made many of them thankful for all the resources like clean water and healthy foods that we have available.

“I realized how hard it was to grow crops in Africa with their poor soil and nutrient deficiencies.  We have is easier around here due to the good nutrients in our soil.” Spencer

“I noticed that people in Africa were having a hard time growing crops due to the lack of nutrients in the soil.  I learned they didn’t have enough education in agriculture to know that planting the same crops every year isn’t good for the soil.” Jasmin

“I saw how important it is to educate people about the land.  If those farmers had known how to properly fertilize and rotate crops, they would have been able to grow more food for themselves and their communities.” Mary

Plans for future lessons:  I would like students to complete would be to take a person’s income and using the average percent spent on food, calculate how much money annually they are spending. In the United States, approximately 10% of a person’s disposable income is spent on food (source: American Farm Bureau).  However, in underdeveloped countries such as India, approximately 50% of their disposable income is spent on food (statistics from the United Nation.  By doing this extension, students would be able to see that the hard working American farmers produce more than enough food for everyone in our country.  The quantity of readily accessible food leads to a lower cost annually spent on food in the United States compared to many countries in our world.  These lessons are meant to include all aspects of the science, social studies, math and reading curriculum.

Another activity is students will create a Genetically Modified Organism (GMO) that could provide food, nutrients and even edible vaccines for one of the top ten impoverished nations of the world.  Students discovered that 7 of the top 10 most impoverished nations were in Africa.  Students utilize the inquiry method along with the integration of technology and technical reading to enhance their creativity as they designed their GMO character. The organism had to adapt within an ecosystem of their chosen country. Research was conducted to determine what economical, geographical, social, and cultural challenges faced their country that in turn led to a lack of available food. Advertisements with catchy slogans were developed to promote the introduction of the new organism to each nation’s government. While studying genetics, students went a step farther by examining food items that are currently genetically modified in the United States. This was an eye opening experience as many students had no idea that many common foods have been genetically modified. National security was discussed with the long term affects of the GMO on the food chain.  This problem based learning lesson was a wonder spring board into many other creative aspects weaving Agriculture into our Science curriculum.

Why teaching soil science is important to me:  Growing up a farmer’s daughter, I have always been intrigued with interaction between humans and the environment.  I have always been interested in environmental and agricultural issues on a global level.  I think that it is vital for the students to learn how precious our soil is and that it’s not just “dirt.” Soil is the main medium for growing crops which in turn feed both livestock and humans—therefore it is the basis of the majority of our food supply.  Soil is a precious resource that I hope students learn to protect so future generations may also reap the benefits.

Do you have a favorite resource?  Email Emily at estubbs@nutrientsforlife.org to be featured as a “Spotlight!” 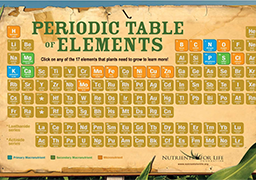 Dedicated teachers such as this young woman are what are the hope for the future of our nation! and the world!

I’m so glad our children are being taught how blessed we are to have such good farmland in America so we can grow crops to feed our population. Our hard-working farmers do not get the respect they deserve. Hardin County, Kentucky is blessed to have such a dedicated teacher as Leslie Meredith.